In an earth shattering moment NASA has announced that one of the Mars rovers has uncovered life on the surface of the red planet. This is sure to be the lead story of every newscast and on the headlines of every newspaper worldwide. "LIFE FOUND ON MARS"

Now that I have your attention, you can agree with me that this is how such a discovery would play out if it really happened. Life would be trumpeted and valued as worthy to be marveled and protected. Why is it that it is acceptable to question when life begins and deem some unworthy for reasons such as economic, if it is carried in the womb of the mother? Is it not still valuable and miraculous in these confines? In no other place is life, or a child, in more danger than while it is still in the womb of it's mother. And is it not ironic that most of the people that will fight for the life of even an insect, or be willing to bring about famine or economic disaster to protect a 2 inch fish's habitat, be also willing to adamantly fight to insure the right of an estimated 1 million babies lives to be snuffed out every year? Even before they have a chance to contribute to society, or even take their first breath?

Many of these same individuals are demanding that health-care be a right while stating that it is a crime to deny health-care for economic reasons (this at least can be a viable argument). Meanwhile, many of the same individuals will deny the right to life for economic reasons (this destroys the argument made by the same group above). I am asking for common sense and less contradictions in philosophy. Why do many of the same people oppose the death penalty for some of the most heinous crimes, and then support by all means the death penalty for the truly vulnerable and innocent, the unborn? I can understand someone being in opposition to both. You could even make the argument for the death penalty and oppose abortion as the guilty have been found just that, meanwhile the unborn are guilty of nothing.

I want to stress that we should share these thoughts with love and not try to condemn those that have had this procedure. They have been lied to and left uneducated in this procedure and the truth about the growth of babies in the womb. There have been medical personnel disciplined for allowing the mother to see the sonogram of their child only later to cancel the abortion. THIS IS ABOUT MONEY! Not the rights of women. There are billions spent in the abortion industry and yet it is never questioned for its ethics. How can they deem that a child of 13 can make this decision without the consent of her parents and now argue that children should be allowed to stay on their parents health insurance until the age of 27? The same child of 13 cannot be given an aspirin without the parents consent but can make this decision on an invasive, emotionally charged, and major surgery without their consent? Ludicrous!

Supreme Court Justice Ruth Bader Ginsberg once argued in front of the Supreme Court as legal council on behalf of the ACLU to lower the age of consent to 12! She was later appointed to the Supreme Court by president Clinton and approved 96-3 by the Senate. This is not about the rights of women. THIS IS ABOUT MONEY and the exploitation of women and children. Watch the video at the end of this article,from CNN, that talks about the ACLU defending the rights of girls to dance in Rhode Island strip clubs at the age of 16.

Go to the homepage of NAMBLA (North American Man Boy Love Association) and see how they thank the ACLU for defending them from accusations of crimes including being accused as an accomplice to the rape and murder of a 10 year old boy. Here
Read more about this horrible attack and the ACLU's defense of this case here

The truth is, the argument in the case of rape and incest will take a different look when you look at the facts. The facts show that abortion is a major tool to conceal the crimes and enable the predator to keep the authorities from finding out about the crimes; only to allow the child to be repeatedly abused in many cases. You can find so many cases of this happening it will make you ill. Here are just a couple of the stories. Here and Here
You can hear the results of some of the 800 calls placed to Planned Parenthood Clinics by a girl posing to be a 13 year old with a 22 year old boyfriend at the end of the story.

Planned Parenthood was started up by a communist minded bigot named Margaret Sanger. Included in her quotes are these.
On blacks, immigrants and indigents:
"...human weeds,' 'reckless breeders,' 'spawning... human beings who never should have been born." Margaret Sanger, Pivot of Civilization, referring to immigrants and poor people
On the rights of the handicapped and mentally ill, and racial minorities:
"More children from the fit, less from the unfit -- that is the chief aim of birth control." Birth Control Review, May 1919, p. 12
On the extermination of blacks:
"We do not want word to go out that we want to exterminate the Negro population," she said, Woman's Body, Woman's Right: A Social History of Birth Control in America, by Linda Gordon
There are many more but this one sums up her feelings.
"The most merciful thing that a large family does to one of its infant members is to kill it." Margaret Sanger, Women and the New Race (Eugenics Publ. Co., 1920, 1923)
Not to forget that Planned Parenthood still offers the "Margaret Sanger Award" to recognize leadership, excellence, and outstanding contributions to the reproductive health and rights movement. They have also been recorded accepting "scholarship money" that is to be applied for paying for the abortion of black babies (exclusively). Who else could survive these kinds of charges? 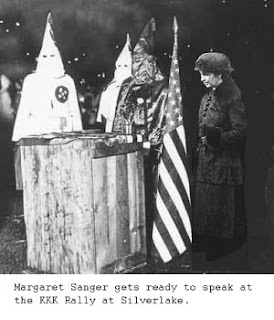 It is about MONEY, not woman's rights and soon even more of your tax dollars are going to help fund Planned Parenthood activities. I heard one elderly German man confess about his church being next to the railroad tracks, and when they would bring cattle cars of people by to take them to the death camps they could here them pleading. To drown out the pleading they would sing their songs of praise louder. How long will Americans turn up the volume? If a teenager gets drunk, wrecks the car, and ends up paralyzed from it, the mistakes cannot be undone and their life is changed forever. When there is an unwanted pregnancy why do we think that it can just be undone and why should the unborn pay with their lives?

This was written by Kevin Harned.
Posted by Hillbilly Logic at 10:33 PM