Muslim Family Day at Six Flags Questioned by Some 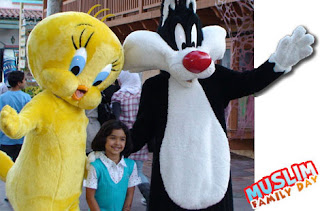 Just how does the typical non-Muslim American feel about the day of celebration that will soon be upon us at Six Flags Parks all across this great country? The day that I speak of is otherwise known as “Muslim Family Day”. Many will bring up that there is a “Christian Family Day” right? It is only fair that the Muslim faith be aloud a day too? (they will declare)
1.) The date; September 12, 2010. Is it a coincidence that at four of the parks the date of this event falls the day before or after the anniversary of the attack on America by Islamic extremists (9-11-2001)? The first thought that comes to mind is the importance and significance that are placed on dates and symbolism in those of the Muslim faith. Supporters of “Muslim Family Day” declare this days importance to be linked to Eid Al-Fitr which is Commemorated by Muslims around the globe. Eid Al-Fitr marks the end of the holy month of Ramadan and it is determined by the lunar calendar., which in 2010 occurs on September 9th.

As we can see, the dates of “Muslim Family Day” differ in different cities so it may be difficult to argue that this is date related. At the very least Six Flags in Chicago IL., Washington DC, Jackson NJ, and Springfield MA., should have had more consideration for the closeness in proximity to the anniversary of the worst terrorist attacks on American soil.

Let's take a look at other aspects of this event that are more easily objectionable but less objected too.
2.) Who is sponsoring this event? The answer to that question can be found front and center on I.C.N.A's website. I.C.N.A stands for Islamic Circle of North America. Their definition of themselves can be found Here. To obtain the pleasure of Allah (SWT) through working for the establishment of Islam in all spheres of life. ICNA has many projects, programs, and activities which are designed to help in the process of molding the individual and reforming society at large.
There are many ways of saying the same thing, it's just that some ways are worded in a manner that they can mask or make something appear to be less aggressive. While many kind and well intentioned sounding things appear in the rest of the description it is at the interpretation of the writer, not the reader, that defines the meaning. In other words, just as you can take something out of context and make it sound negative, the writer can also intentionally take and insert statements that are out of context to make something sound more desirable than it normally would to the masses. A good example may be to leave a statement not well defined, as an example working for the establishment of Islam in all spheres of life.
This sounds harmless enough but could just as easily be worded to establish Shariah (Islamic) Law in all of the world.
Now, before anybody screams that this is just my interpretation just read into their teachings (I.C.N.A) or even ask them and you will see and hear the true intent. While they include statements like “To oppose immorality and oppression in all forms, and support efforts for civil liberties and socioeconomic justice in the society,” how is this to be taken? Immorality and oppression are subjective and should be viewed thru the law of the Qur’an as the writer most likely defines it and not thru the understanding of the context in the western world. And just what context is socioeconomic justice to be viewed?
The bottom line is this; This country as we know it, and it's constitution along with it's freedoms, are completely incompatible with Islamic Law and enforcement of it's beliefs. This is common knowledge and helps to explain why we are described as “The Great Satan” by so many in the Muslim nations. Before anybody accuses me of hate speech here I am just stating facts. As long as we are a free nation we must be able to question the motives of those that we feel are not being on the up and up with their intentions. When this right is totally lost we will be free no more. Again, I ask you to consider the evidence.


ICNA has three divisions: ICNA Sisters Wing, Young Muslims Sisters and Young Muslims Brothers and multiple affiliations. You can find the Young Muslims recommended reading list Here. In it you will find many books authored by individuals that can easily be considered radical. Taking a look at just one prominent author, Hasan Al-Banna, we find that he is the founder of the “Muslim Brotherhood”. The Motto for this group just happens to be "Allah is our objective. The Prophet is our leader. The Qur'an is our law. Jihad is our way. Dying in the way of Allah is our highest hope.
Jamaat-e-Islami founder Abul 'Ala Maududi is another prominent author found on this site. Maududi advocated worldwide overthrow of all non-Muslim regimes and this is a quote from one of his books, Jihad Fi Sabillilah "It must now be obvious that the objective of the Islamic jihad is to eliminate the rule of an un-Islamic system, and establish in its place an Islamic system of state rule. Islam does not intend to confine his rule to a single state or a hand full of countries. The aim of Islam is to bring about a universal revolution. Although in the initial stages, it is incumbent upon members of the party of Islam to carry out a revolution in the state system of the countries to which they belong; their ultimate objective is none other than world revolution." In one book available on ICNA's Youth web-page, "Towards Understanding Islam”, he wrote: "In all these cases Jihad is as much a primary duty of the Muslims concerned as are the daily prayers or fasting. One who shirks it is a sinner. He is plainly a hypocrite who fails in the test of sincerity and all his 'Ibadat [worship] and prayers are a sham a worthless hollow show of devotion."

In 1997, I.C.N.A.'s magazine “The Message”, celebrated the life of a young martyr. The article was titled “Actions Speak Louder Than Words” and besides telling the young mans story it started by stating;"The Qur'an urges Muslims to seek knowledge and then to act on the knowledge they acquire. It also says that the person who merely obtains knowledge without taking actions is like a donkey carrying books, i.e., such knowledge becomes a burden that benefits no one. For one young man, knowledge became a source of inspiration that led him to take actions that can benefit everyone.
On November 29,1997, at ICNA's Southeastern Regional Convention in Atlanta, a plaque was presented to Jibril's family in celebration of his martyrdom. The plaque read:
"Think not of those who are killed in Allah's Cause as dead. Nay they are alive with their Lord and have their provision (Qur'an 3:169). In recognition of Jibril Abu-Adam (also known as Lawrence Nicolas Thomas) for his devotion to His Creator and his ultimate sacrifice on behalf of his fellow Muslims in Kashmir."
Five young Americans disappeared from the greater D.C. area last November, only to be arrested a week later in Pakistan where they allegedly sought to join the jihad against Americans. They appeared to have comfortable, supportive homes but they all had something else in common, all five belonged to I.C.N.A. As Ramy Zamzam, one of the defendants emerged from court in January, he declared, "We are not terrorists. We are jihadists, and jihad is not terrorism."

Evidence suggests that I.C.N.A has given financial support to groups that are recognized as terrorist organizations. You can see screen shots of websites to substantiate the connections to terrorist supporting organizations and contributions given to them from I.C.N.A Here. Jamaat-e-Islami or JI has it's own charitable group, the Al-Khidmat Foundation (AKF). On August 17, 2006, JI posted a story on its official website that AKF had just taken a delegation to the home of the global head of Hamas, Khaled Mashaal. They then gave Mashaal the equivalent of $99,000 and delivered to him a "special message" from the president of JI, Qazi Hussain Ahmed. In turn, Mashaal thanked the group and said Hamas will continue to wage jihad (terror) against Israel.
You can read an article by Joe Kaufman making his case against I.C.N.A Here.

Although there is much that was not included in this article there appears to be more than enough evidence that true intentions are not being relaid by this organization and one can certainly believe that they are operating in stealth mode. Dr. Zuhdi Jasser, founder of the anti-Islamist American Islamic Forum for Democracy, stated "This organization [ICNA] is teaching Islamism as a dominant political movement ...Basically this theo-political ideology is the gateway drug toward violent Islamism for susceptible Muslims. Those who are not susceptible Muslims are still part of a separatist movement which is not commensurate with our Constitution and Bill of Rights."
In closing I would like to include a quote from Muslims of the Americas (Jamaat ul-Fuqra) leader Sheikh Mubarak Gilani -"Act like you are a friend and then kill them, just like from the book.” While they are not part of I.C.N.A., they are well funded from Pakistan and purportedly have operated at least 35 known terrorists camps in America. Gilani was the target for an interview in January 2002 by Wall Street Journal reporter Daniel Pearl when he was kidnapped and later be-headed. He also had disciples recruiting on the West Capital Lawn in Washington DC on Muslim Day September 25th, 2009, no doubt another innocent event.

Sources include but are not limited to : The Investigative Project On Terrorism, New York Times, Act! For America, Americans Against Hate, Associated Press, I.C.N.A, Jamaat-e-Islami, Young Muslims, Washington Post
Posted by Hillbilly Logic at 10:54 AM